Published in the United States by Crown, an imprint of the Crown Publishing Group, a division of Penguin Random House LLC, New York.

CROWN and the Crown colophon are registered trademarks of Penguin Random House LLC.

Photograph credits appear on this page.

Library of Congress Cataloging-in-Publication Data is available upon request.

To all the people who have helped me become:

the folks who raised me—Fraser, Marian, Craig, and my vast extended family,

my circle of strong women, who always lift me up,

my loyal and dedicated staff, who continue to make me proud.

To the loves of my life:

Malia and Sasha, my two most precious peas, who are my reasons for being,

and finally, Barack, who always promised me an interesting journey.

When I was a kid, my aspirations were simple. I wanted a dog. I wanted a house that had stairs in it—two floors for one family. I wanted, for some reason, a four-door station wagon instead of the two-door Buick that was my father’s pride and joy. I used to tell people that when I grew up, I was going to be a pediatrician. Why? Because I loved being around little kids and I quickly learned that it was a pleasing answer for adults to hear. Oh, a doctor! What a good choice! In those days, I wore pigtails and bossed my older brother around and managed, always and no matter what, to get As at school. I was ambitious, though I didn’t know exactly what I was shooting for. Now I think it’s one of the most useless questions an adult can ask a child—What do you want to be when you grow up? As if growing up is finite. As if at some point you become something and that’s the end.

So far in my life, I’ve been a lawyer. I’ve been a vice president at a hospital and the director of a nonprofit that helps young people build meaningful careers. I’ve been a working-class black student at a fancy mostly white college. I’ve been the only woman, the only African American, in all sorts of rooms. I’ve been a bride, a stressed-out new mother, a daughter torn up by grief. And until recently, I was the First Lady of the United States of America—a job that’s not officially a job, but that nonetheless has given me a platform like nothing I could have imagined. It challenged me and humbled me, lifted me up and shrank me down, sometimes all at once. I’m just beginning to process what took place over these last years—from the moment in 2006 when my husband first started talking about running for president to the cold morning this winter when I climbed into a limo with Melania Trump, accompanying her to her husband’s inauguration. It’s been quite a ride.

When you’re First Lady, America shows itself to you in its extremes. I’ve been to fund-raisers in private homes that look more like art museums, houses where people own bathtubs made from gemstones. I’ve visited families who lost everything in Hurricane Katrina and were tearful and grateful just to have a working refrigerator and stove. I’ve encountered people I find to be shallow and hypocritical and others—teachers and military spouses and so many more—whose spirits are so deep and strong it’s astonishing. And I’ve met kids—lots of them, all over the world—who crack me up and fill me with hope and who blessedly manage to forget about my title once we start rooting around in the dirt of a garden.

Since stepping reluctantly into public life, I’ve been held up as the most powerful woman in the world and taken down as an “angry black woman.” I’ve wanted to ask my detractors which part of that phrase matters to them the most—is it “angry” or “black” or “woman”? I’ve smiled for photos with people who call my husband horrible names on national television, but still want a framed keepsake for their mantel. I’ve heard about the swampy parts of the internet that question everything about me, right down to whether I’m a woman or a man. A sitting U.S. congressman has made fun of my butt. I’ve been hurt. I’ve been furious. But mostly, I’ve tried to laugh this stuff off.

There’s a lot I still don’t know about America, about life, about what the future might bring. But I do know myself. My father, Fraser, taught me to work hard, laugh often, and keep my word. My mother, Marian, showed me how to think for myself and to use my voice. Together, in our cramped apartment on the South Side of Chicago, they helped me see the value in our story, in my story, in the larger story of our country. Even when it’s not pretty or perfect. Even when it’s more real than you want it to be. Your story is what you have, what you will always have. It is something to own.

For eight years, I lived in the White House, a place with more stairs than I can count—plus elevators, a bowling alley, and an in-house florist. I slept in a bed that was made up with Italian linens. Our meals were cooked by a team of world-class chefs and delivered by professionals more highly trained than those at any five-star restaurant or hotel. Secret Service agents, with their earpieces and guns and deliberately flat expressions, stood outside our doors, doing their best to stay out of our family’s private life. We got used to it, eventually, sort of—the strange grandeur of our new home and also the constant, quiet presence of others.

The White House is where our two girls played ball in the hallways and climbed trees on the South Lawn. It’s where Barack sat up late at night, poring over briefings and drafts of speeches in the Treaty Room, and where Sunny, one of our dogs, sometimes pooped on the rug. I could stand on the Truman Balcony and watch the tourists posing with their selfie sticks and peering through the iron fence, trying to guess at what went on inside. There were days when I felt suffocated by the fact that our windows had to be kept shut for security, that I couldn’t get some fresh air without causing a fuss. There were other times when I’d be awestruck by the white magnolias blooming outside, the everyday bustle of government business, the majesty of a military welcome. There were days, weeks, and months when I hated politics. And there were moments when the beauty of this country and its people so overwhelmed me that I couldn’t speak.

Then it was over. Even if you see it coming, even as your final weeks are filled with emotional good-byes, the day itself is still a blur. A hand goes on a Bible; an oath gets repeated. One president’s furniture gets carried out while another’s comes in. Closets are emptied and refilled in the span of a few hours. Just like that, there are new heads on new pillows—new temperaments, new dreams. And when it ends, when you walk out the door that last time from the world’s m
Next > 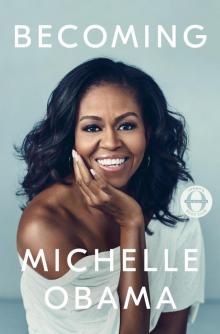